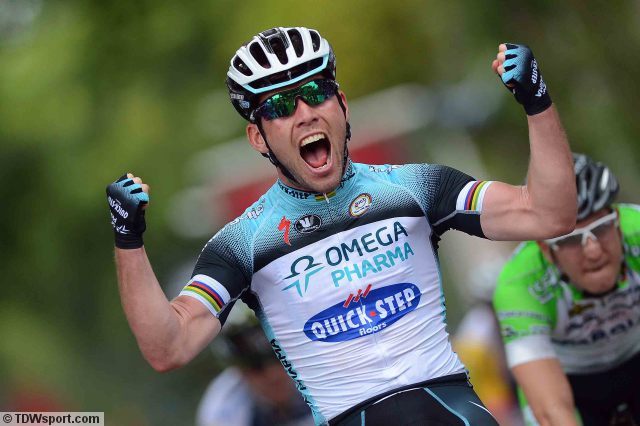 Mark Cavendish doesn’t have a lot of time for armchair cycling commentators and even assuming that the Etixx Quick Step sprinter had stumbled upon this I don’t think it was just me that Cav was trying to prove a point to in Dubai at the start of this month. Cavendish took two stage wins and the overall GC in what was always likely to be another sprint fest on the Arabian Peninsula. Of course the win here won’t (read hasn’t) silenced the speculation over whether or not he can reclaim the throne from Marcel Kittel or, perhaps more importantly, earn another lucrative contract with his team. Even Patrick Lefevere is suggesting that Cavendish needs results if he wants to be re-signed by the erstwhile OPQS squad. Of course Kittel was absent from Dubai this year, so all bets are currently off over who has come into the season in better form, the key showdown likely to come at the Tour. However Lefevere indicated that Cavendish needed to perform in the early season races like this weekend’s Kuurne Brussel Kuurne and the first monument of 2015; Milan San Remo. The Belgian squad can’t change its spots as far as wins in the classics being the priority despite the investment in GC riders like Uran and emergence of Kwiatowski (admittedly no slouch in the one day races either). The impression I get is that a repeat of Cavendish’s 2009 MSR victory will be enough to ensure his continued employment with the potential size of his contract dictated by continuing that form into the summer.

One of the riders that Cavendish will need to beat in MSR is Kittel’s teammate John Degenkolb. The Giant sprinter was the main threat to Cavendish on GC in Dubai and while the Manxman impressed with his 17th place on the one stage that offered an opportunity for the climbers, Degenkolb showed his versatility by scaling the steep sides of the Hatta Dam faster than Alejandro Valverde to take victory and briefly hold the overall lead. Giant have an abundance of sprinters, but it’s to their advantage that each of them bring something different to the party. Degenkolb can do the out and out bunch sprinter thing, even if he isn’t quite at the level of Kittel or Cavendish for outright speed. He’s emerging as a rider who is potentially more valuable in terms of world tour points however as he will be in the mix on (more than just) a pan flat sprinters stage and he can figure in one day races too. Even last year with his podium in Paris Roubaix and remaining at the sharp end on the Ronde until the last few km’s showed that Degenkolb could prove to be the more intriguing Giant sprinter to watch in 2015.

The other take out for me in Dubai was Elia Viviani taking stage 2 and his first win in Sky colours. I think Viviani will be a great signing for Sky as they haven’t had a pure speed guy since Cavendish left. Of course it’s possible that Viviani will end up feeling just as frustrated as Cavendish if he’s selected for the Tour as Sky will be entirely focused on getting Chris Froome back into the yellow jersey, but if instead the Italian is picked for the Giro I expect he will claim wins. Sky also had Ben Swift in Dubai, but he’s morphed into a Degenkolb style rider and will be hoping to improve upon his third place at last years MSR. Most of the column inches will be given over to Bradley Wiggins tilt at Paris Roubaix this season and as much I would like to see Wiggins feature there I’m hoping that Swift is able to build on his return to form last year and get a big win in 2015.

It was a shame that we didn’t get to see any of the action from the Tour of Oman this year. Since I started the blog I have enjoyed getting an early look at the grand tour contenders in what is the only one of the desert races that isn’t all flat stick racing. It’s often a good guide to form for the summer too, although Froome’s repeat win in 2014 ultimately didn’t guarantee a repeat in the Tour. Whether or not it was to do with the TV coverage this year (or lack of) the big names were absent from this years edition with Valverde and Tejay Van Garderen the pre-race favourites. Vincenzo Nibali was in Oman (and Dubai) but his presence has been decidedly low key and at this point his form is as much of a closed book as it was ahead of last years Tour.

The eventual winner was Lampre’s Rafael Valls (no, me neither). Valls won the key stage with the summit finish on the Green Mountain from Van Garderen and this was enough to ensure the overall. From the VCSE sofa Valls looks like one of those riders who could be (infamously) described as ‘coming from nowhere’. He’s been with Lampre since Vacansoleil folded at the end of 2013 and this win is by far his biggest to date. Lampre, who didn’t exactly see much of a return on investment from Chris Horner last season and have finally parted company with perennial under achiever Damiano Cunego no doubt will wish Valls’ victory heralds the dawn of something big. If he does build on the result this could mean big things for Spanish cycling too as Alberto Contador is discussing retirement and Valverde isn’t getting any younger.

It’s hard to say why there wasn’t at least a daily highlights package from Oman this year. Of the three desert races Dubai, the upstart, has by far and way the best coverage in so much as you can watch it live. The Tour of Oman is an ASO supported race and no less than Eddy Merckx is on hand to glad hand the press and yet it has been possible only to follow ‘live’ on social media in 2015. Oman doesn’t have the riches of Dubai (or Qatar) but surely it’s the quality of the racing that should take precedent as far as coverage is concerned? Oman’s demotion in the TV stakes is a bit of an uncomfortable example of what happens in a sport where there is (comparatively) little money around. If the future of the early season racing (at least as far as TV is concerned) is that armchair fans can only see the ‘action’ in Dubai because that’s where the money flows it will be a change for the worse.

For Oman in 2013 read Andalucia in 2015. Chris Froome and Alberto Contador had their first face off of the year in the Ruta del Sol and their first encounter since Contador emerged the victor of the Tour re-match; the 2014 Vuelta. Both riders respective teams had shuffled their deck in the off season with Sky looking (arguably) to have done the best business with the arrival of Nico Roche and Wout Poels to support Froome’s grand tour ambitions. If Sky are hoping to get some insight into the mindset of Oleg Tinkoff’s boys, then the men in yellow intend to try and do the same with the arrival of Sean Yates as a DS for 2015.

After a crash strewn first stage it was first blood to Contador in the short time TT held later the same day. By the time he had ridden away from Froome and the rest of the Peloton on Friday it looked to me like game over. Contador rode the stage just like he had last August and September; watching, waiting, never far from the front and when the moment came attacking and leaving everyone behind. Contador looked so strong that I was surprised that the gap to Froome was only 19 seconds. He would take a lead of 27 seconds into the next stage. Saturday’s stage to Alto de Allanadas was one of those typical of racing in Spain and Italy (the climb featured in the 2013 Vuelta) with the final km’s maxing out over 20%. That it was Froome that dominated on the stage must have been a surprise to everyone but the Sky rider. As Froome attacked, Contador seemed slow to react and although slower to capitulate, that was the outcome. Froome buried himself for the win; I don’t think I have ever seen him look as shredded to take a stage in any race (certainly not one so early in the season). The effort was rewarded with the race lead by one second as Contador who recovered a little towards the line just missed out on retaining the GC.

And that was it, game over (for real this time) with the final stage unlikely to see the GC change. Conclusions? Well if  this race is a facsimile of Oman in 2013 then the pendulum has shifted back towards Froome and Sky. There’s a lot of racing between now and July and the Tour though. The riders will face each other again at Tirreno Adriatico where the climbing stages should favour Froome. If he can take this early season ‘double’ then the battle, at least as far as these two are concerned will be twofold. Psychologically Contador will be at a disadvantage now, more so if he finishes behind Froome in Italy next month. The Ruta del Sol is a ‘home’ race that Contador has never won and arguably there was more at stake for him last week as a result. At the Tour in 2013 I wondered how much of Contador’s inability to respond to Froome’s attacks was in his head, his body language screamed demoralisation. Contador is attempting the Giro / Tour double in 2015. This could work to Contador’s advantage in July, if he wins the Giro a couple of months before. If he enters the Tour with the first of the 2015 grand tours under his belt the question will be; can he be competitive in two successive grand tours (in 2015)? If he can, if indeed he can win, Contador will have achieved the greatest result for a generation. If he doesn’t he can still say that he won grand tours in successive years. In short, Contador has nothing to lose.

The other factor is the make up of the respective teams. Sky’s additions this year look tailor made for Froome to be a favourite for the Tour. Tinkoff used new recruit Ivan Basso as Contador’s go to guy last week and if I had to choose between Roche and Basso, I would pick Roche every time. Even with Mick Rogers likely to figure in both races for Tinkoff, Roche is a big loss for the team and Basso doesn’t strike me as a good enough replacement. This is before you consider Porte, Nieve, Thomas and Kennaugh etc. who will be in the mix somewhere. I think Porte will get another bite at the GC leaders role, but I think for Sky it’s all about the Tour this year, no matter how much they talk the talk about Wiggins at Roubaix.

This doesn’t mean i’m tipping Froome for the Tour, or that I want him to win. I still find him a difficult guy to warm to and reading the article on TUE’s by Caley Fretz in this months edition of Velo hasn’t made me feel the love either. But Sky will throw the kitchen sink (interpret as you will, be you fanboy or hater) at Froome and the Tour this year and seeing how the other teams respond as Sky up the ante (again) will make the 2015 grand tours interesting if for no other reason than that.

2 thoughts on “How do you televise cycling during a sandstorm? – VCSE’s Racing Digest #38”