Other than doing a few commutes to and from the LBS* I was working in at the time, I hadn’t thrown a leg over my hardtail MTB since the summer of 2014. Now working somewhere that you can get a trade price (+10%) deal is always likely to prove fatal to a bike tart like me and the time that I worked in this particular shop was no exception. The 2012 Giant XTC 29er that dealt with most of my off road duties had acquired various upgrades including Ritchey Vantage tubeless ready wheels and a Rotor double Q ring chainset.

The final piece in the jigsaw was a (new at the time) Stanton Sherpa 853 frame; the intention being to carry out a frame swap with the Giant. There were a few bumps in the trail before the bike was finished. New forks as the steerer on the original Rockshox was marginally too short and a few other niggles saw the Stanton rolling chassis hung in my workshop in the Autumn with every intention for me to get the bike completed for the following summer.

What followed was a rather more significant obstacle to completion; the Stanton got stolen. Long story short is that it was recovered within a week. Maybe the thief thought it was a bit too hot to handle (it’s a pretty rare bike around here)? Now you may be asking at this point; what has any of this got to do with a helmet? Stay with me as they are connected.

I had hooked myself up with a 661 Recon helmet back in 2012 when that was pretty much the only ‘Enduro’ helmet available. Come to think of it I’m not even sure that Enduro was a ‘thing’ back then. These were the days when 650b wheels were pretty new on the MTB scene and long travel was 140mm and generally rolling on 26″ wheels. Fast forward to 2016 and no one rides trail bikes and it’s all about Enduro and 160mm travel. Fox is no longer a byword for performance suspension and Rockshox make rear shocks that the best riders would actually consider. Funny how things can change in a couple of years.

One of the things that has changed is that there’s no a whole range of brands doing Enduro style headgear and that rather convoluted preamble has finally arrived at the Raleigh Magni helmet.

First things first is that it might look familiar. That’s because the shell is also used by O’Neal and 7iDP for their own more expensive offerings (roughly £20 more than the Magni). So the first tick in the box is that this is a pretty trick looking lid that costs little more than your typical entry level Giro. OK, so it’s missing some of the oh so fashionable day-glo colour ways that are needed to hang with the Enduro cool kids but at least the black green combo looks like it might be acquainted with them.

With some Enduro style helmets costing more than £100 the Raleigh Magni certainly appears to offer value for money and if cost and looks are you top priorities then this might be your helmet of choice. If you’re on a budget or upgrading from an XC style lid priced less than £40 the Magni might feel pretty good too. The difficulty for me reviewing the Magni is that I’m not comparing it to a £30 Bell as that’s not the kind of helmet I normally wear. Against an S Works Evade or Catlike Whisper the Magni feels like what it is; cheap. 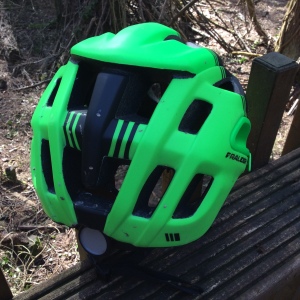 This isn’t quite as bad as it first sounds. When you pay for your Magni your investing in a good looking design that’s good enough for a brand like O’Neal to put their name on it. I have no doubt that the Magni would be no less protective of the VCSE grey matter if I parted company with my bike. What Raleigh have done here is take a mid range design and pared it down to an entry level price by speccing a chin strap and retention system that you would normally see on a helmet costing £20. The retention dial is fairly noisy to use (no bad thing) but there isn’t always a sense that the sound of the ratchet equals actual adjustment. Sizing is good and there’s enough of a range of sizes available for the Magni to fit most riders with the normal caveats that not every brands helmet shape suits everyone’s head shape (I’m generally fine with any Specialized lid but can’t get a Scott to fit).

So far I have only ridden in the Magni on cold days so I can’t comment too much on the quality of the ventilation on offer but when the going gets hot what I can only guess as another cost saving becomes all to apparent. There isn’t masses of padding but there’s a strip running around the front of the helmet that would cover your forehead. Comfort wise it’s fine but it appears to have no absorbent qualities at all. It’s not unusual to feel a little rivulet of sweat running down my face on a harder effort. I can live with the built to a price feel of some of the fittings on the Magni as I trust the shell to look after me in an accident. Where I part company is the pads inability to absorb moisture and I’m wondering  if this can only get worse as the weather improves.

So should you buy one? If you want an Enduro helmet and you’re on a budget, you will not buy cheaper and arguably better than a Raleigh Magni. If, on the other hand you’re the kind of rider that tools around on a Enduro bike costing £2,000 or more then you can probably afford something that’s not built down to a price and the Magni’s not for you.

Cons – fittings look and feel cheap, might be too hot in summer