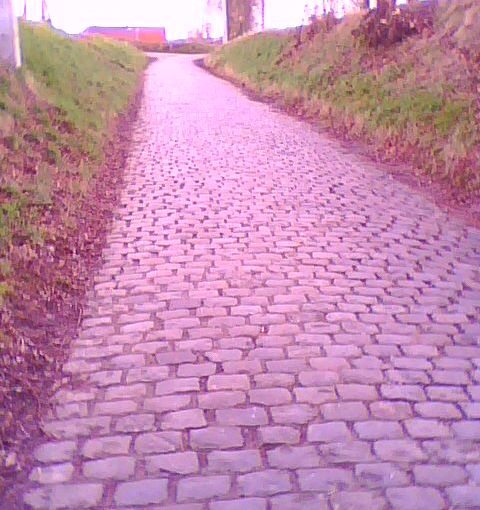 Beware the errant spectator, the misplaced guard rail or even the poorly secured advertising banner. There are many things that can derail your chances of success in the classics and it was an apparent combination of those three things that ended Peter Sagan’s hopes of doubling up on his Ronde victory from last year. Like the mysterious injuries caused by red hot disc brakes perhaps we will never know what exactly precipitated Sagan’s fall on the  Oude Kwaremont but whatever it was provided enough for Philippe Gilbert to stay away and claim one of the monumental classic races that he has always maintained he was capable of winning.

Riding in the Belgian champions colours Gilbert had gone on the attack with more than 50 kilometres of racing to go and still facing some of the hardest climbs. In the races I’ve seen him in this year he’s looked like a rider who wants to race for every sign even if the result was unlikely to go his way. A gambler then? Perhaps, but maybe also a rider with a point to prove. Tom Boonen, racing his final Flanders, is targeting Paris Roubaix as his swan song but he’s a perennial favourite at 36 years old. So Gilbert at two years Boonen’s junior; why not? Well saying you can win it is one thing, actually doing it is something else entirely.

Gilbert has clearly been rejuvenated by his move to Quick Step after four years at BMC. It’s always seemed to me that the last thing you want to do as a professional rider who’s winning races regularly is to move to BMC. Gilbert moved there after a stellar 2011 season that saw him take all three of the Ardennes classics as well as an early season win in Strade Blanche. He might have spent a year in the rainbow stripes but another Amstel Gold in 2014 aside it looked like Gilbert was a relatively under productive on a big salary. If this does him a disservice even the rider himself questioned whether the team really knew how to get the best from him, even going so far as suggesting that he would sacrifice his form in the Ardennes for a crack at the cobbles. BMC didn’t appreciate that suggestion at the time and we’re happy to put the house on Van Avermaet by not extending Gilbert’s contract at the end of 2016. That isn’t to say that BMC were wrong to do so; Van Avermaet has won Het Nieuswblad, E3 and Gent Wevelgem this year and Gilbert has rolled the dice in so many races that his number was always going to come up at some point.

Compare and contrast two teams and Gilbert’s start to 2017. His form in the run up to today’s race should arguably have made him the favourite. Second in E3 and Dwars door Vlaandaren, stage win and GC in the 3 days of De Panne. But no, all the talk, the pre-race hyperbole was Sagan, Van Avermaet and to a lesser extent Boonen. Going long might not have seemed like a recipe for success either, at the point of Gilbert’s attack Sagan and Van Avermaet were both  very much a factor.

It’s often a risk with the biggest sporting events that the decision to ‘go live’ and ‘bring us all the action’ results in very little ‘action’ taking place. Returning from an early season cycling holiday in Spain I restored the power to our Sky Plus box this morning and found that live coverage would start at 9.30 this morning! Unfortunately for me this didn’t make for enjoyable viewing as the British Eurosport feed persists with Carlton Kirby as their lead commentator. Now I know watching cycling is a bit niche out there in the real world so taking issue with who calls the race might be seen as navel gazing in the extreme. Trouble is Carlton is really beginning to grate on me. Days were that David Harmon was Eurosport’s go to cycling guy but he left early in 2013 and since then the big stuff has been Carlton’s gig. He still manages to have his moments and his commentary on Iljo Keisse’s win in the 2012 Tour of Turkey is well worth a search on my YouTube page but most of the time I just wish I could mute him. Funny thing is the commentator who I think does it get right seems to polarise opinion almost as much as Carlton. Rob Hatch did call the race on the world feed (whatever that is) today and I think he generally gets the tone of things right. When the race was failing to ignite early on today Hatch would have lead a discussion about the contenders that wouldn’t have felt like he was calling out names from the start list. He also seems to get the best out of Eurosport’s lead colourman, the legend that is Sean Kelly. Anticipating a barrage of banality from Kirby, Sean can be equally anodyne in his contributions although he got engaged of his own accord today after Gilbert attacked. Rob Hatch manages to ask Kelly a question that actually makes him think and draws out some interesting insights as a result. Pairing Kelly with Kirby does Sean at bit of a disservice I think. Of the other commentators out there I think Ned Boulting will emerge as a bit of a doyenne after a shaky start. David Millar alongside him is very good too as someone with with recent knowledge of life in the peloton as well as no apparent desire to become a ‘character’. Matt Stephens is good in either role and Brian Smith provides a sterling service shooting down Kirby’s flights of fancy when required. Magnus Backstedt doesn’t appear as often as he used to but when he does you have to hope he’s alongside Rob Hatch as Kirby seems to melt any intelligent thought he might have. I’ll have to give some credit to Carlton as he was prepared to call it for Gilbert sooner than anyone else might have dared to, but he does love a trier.

Any commentator would have struggled to find much to get excited about early on though. Race organisers Flanders Classics had made a number of changes to the route this year with the start moving from Bruges to Antwerp. For this monument tradition can always be bought and the suggestion is that Antwerp paid a six figure sum to host the race. Well at least they didn’t have to buy the crowds that turned out in the sunshine. Money apparently changed hands again to get the Muur-Kapelmuur reinstated into the race route after several years absence. No complaints about that and money well spent as it was the back drop for the key selection of the race with Gilbert and Boonen going clear with teammate Matteo Trentin, Sep Vanmarcke, Alexander Kristoff and Sky’s  Luke Rowe in the group. Vanmarcke’s bad luck in the monuments continued and he even managed to bundle Rowe up in his misfortune when the Sky rider couldn’t avoid the falling Cannondale team leader. Vanmarcke got back on a bike eventually but he the crash ended his chances and it looks like a breakthrough win is as far away as ever. Rowe hadn’t look that strong either and with Ian Stannard relatively anonymous so far this year Sky have had a poor return on the cobbles in 2017.

While Sagan’s coming together with an anorak might have sealed things for Gilbert,  Van Avermaet had a good go at reeling him in. He might have done too, but was probably undone by running out of kms to track down the leader coupled with the completely supine response from the other riders in his group. As I said earlier I think there was an element of luck that played its part in Gilbert’s victory but the unpredictable factor was leavened out by the riders self belief that he could bring off a result in this race to the extent of launching a solo attack so far out that most wouldn’t have expected to survive. Gilbert’s decision, post Flanders to pull out of Paris Roubaix suggests that he would have been prepared to gamble again if he hadn’t have pulled off the win in the Ronde.

A few riders that might have featured in Flanders lined up in the Basque Country on Monday. With Sky’s poor showing on the cobbles might they have benefited from the presence of the Gilbertesque Michal Kwiatowski?

I much prefer the early season week long stages races and I look forward to Itzulia primarily to see hard racing in horrible weather and on that score this year’s edition has so far disappointed. We’ve just returned from a week on the bikes in Spain and enjoyed weather that by U.K. standards was positively balmy. I’ll be tuning in to the rest of rtthe week’s action but hoping that the rain clouds start gathering otherwise the race might end up looking like an Argos Volta a Catalonia.