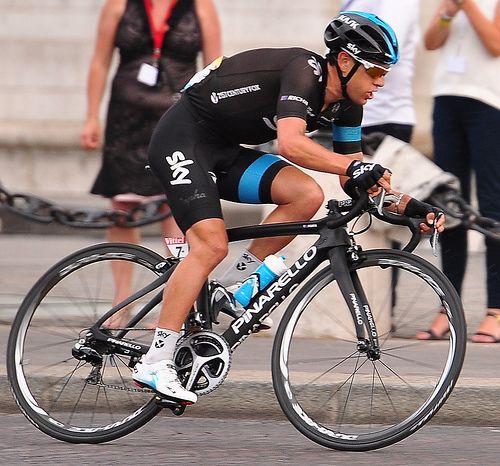 Apre le deluge: suddenly Richie Porte’s two minute time penalty for taking a wheel from Simon Clarke doesn’t seem so important. The (now erstwhile) Sky team leaders result on yesterday’s stage to Madonna di Campiglio had echoes of the collapse in form that he suffered when he assumed Chris Froome’s role in last years Tour. On the day after the long TT stage, where it had been widely assumed (beforehand) that he would at least prove to be a contender if not the dominant rider (in the event losing time) Porte was shelled from the peloton on the penultimate climb and lost the best part of half an hour to Alberto Contador and Fabio Aru.

Porte had started the stage after some speculation that he could have withdrawn from the Giro after a lacklustre performance in the TT and another morale sapping time loss the previous day when he had been caught up in an accident just outside 3km to go and was forced to ride in on a teammates bike that was at least two sizes too big. There was talk of a knee injury and the suggestion that pulling out of the race now would give him time to prepare for this years Tour where he would be back on super-domestique duties for Froome. Whatever the motive behind the decision for Porte to line up at the start yesterday it’s hard to come up with a valid reason for him to stay in the race now. Sky had already promoted Leopold Konig into their GC leadership role ahead of the stage after the Czech had leapfrogged Porte into the top 10 and it is difficult to see that he can offer much support with the collapse in form appearing to be as much mental as physical (if indeed there is any physical issue).

Porte’s fall from grace has been as surprising as it has been swift. Less than a week ago he had looked well placed; in a podium spot and only 22 seconds down on Contador. Losing time due to a puncture towards the end of stage 10 to the leaders need not have been that injurious but the two minute penalty conferred for taking a wheel from fellow Australian (but crucially not a teammate) Clarke must have been the first crack in the Porte edifice that was crumbling by the weekend. With race wins in Paris Nice and Trentino and plenty of race miles under his belt Porte was many people’s favourite going into the Giro (mine included) and his demise has raised rather more questions than; “Can he win a grand tour?”. He wasn’t the only pre-race favourite to lose time on stage 13 but the reaction of the other rider involved is in sharp contrast to Porte’s misery.

Alberto Contador hadn’t given too many hints as to what we could expect of him in the Giro. His programme ahead of the race had provided one or two cameos of the dominant rider of previous years but in some ways it was only the fact that he is Alberto Contador that made you think he would be a factor in the first part of his double grand tour target in 2015. Contador has had his own share of misfortune too. The risks of an outstretched arm, snapping photos of the onrushing peloton are well known to the riders in 2015 and Contador was the last in a line of dominos brought down by an amateur photographer as he approached the line on stage 6. A dislocated shoulder might have spelt the end of his race and arguably his year but Contador continued and it’s almost as if the injury never occured now.

If anything Contador has seemed at most risk from his isolation in the leading group when the road has gone skywards. Half of the summit finishes in this year’s race have been dealt with now, albeit with the hardest climbs still to come but the ageing Tinkoff domestiques have been found wanting while Aru has often had four or five supporters around him (think: the cast of ‘Last of the Summer Wine’ v ‘The Inbetweeners’).But Contador’s strength is Aru’s weakness and the Astana rider hasn’t yet been able to turn his advantage in teammates into time taken from his chief rival. If anything we could be seeing the cracks appearing for Aru too. He took a fortuitous race lead after Contador had been caught up in the same crash that effected Porte on stage 9. Aru wasn’t expected to keep the Maglia Rosa for long in the following day’s TT but he looked shaky on yesterday’s stage with teammate Mikel Landa taking the win and looking the stronger rider of the two. It was probably a bit of mischief making on Contador’s part to suggest this to the media post stage and with Landa a further two minutes behind a change of leadership is perhaps premature. Astana might be able to use an Aru, Landa ‘one-two’ to their advantage in the final week, particularly if Contador is unsupported but at this point it’s difficult to see past El Pistolero for the GC.

Another rider to have fallen by the wayside in this years race is Rigoberto Uran. After podiums in the last two years I expected at least the same from the Etixx rider but he’s another rider that’s looked out of sorts over the last couple of weeks. Uran has suffered with a lack of support on the climbs but he lost a lot of time in the TT (he won the ‘flat’ TT stage in last years race). Might Etixx question whether or not Uran has what it takes to deliver a grand tour result after this Giro? Perhaps, although I think it’s more likely that the team will retrench from their ambitions, focussing more on week long races with the new sensation Julian Alaphilippe.

Outside of the GC battle this year’s Giro has thrown up some interesting stages. I confess that the first week passed me by as I holidayed with the bike in Spain. I missed Orica sharing the Maglia Rosa among three riders during the opening stages and I would have enjoyed seeing Davide Formolo taking his maiden grand tour stage victory. As RCS continue to dredge up ever more spurious reasons to ‘celebrate’ Marco Pantani it’s good to see an Italian rider emerging in a team (Garmin Cannondale) where at least his performances can be believed in.